Investigating Condensation and the Water Cycle 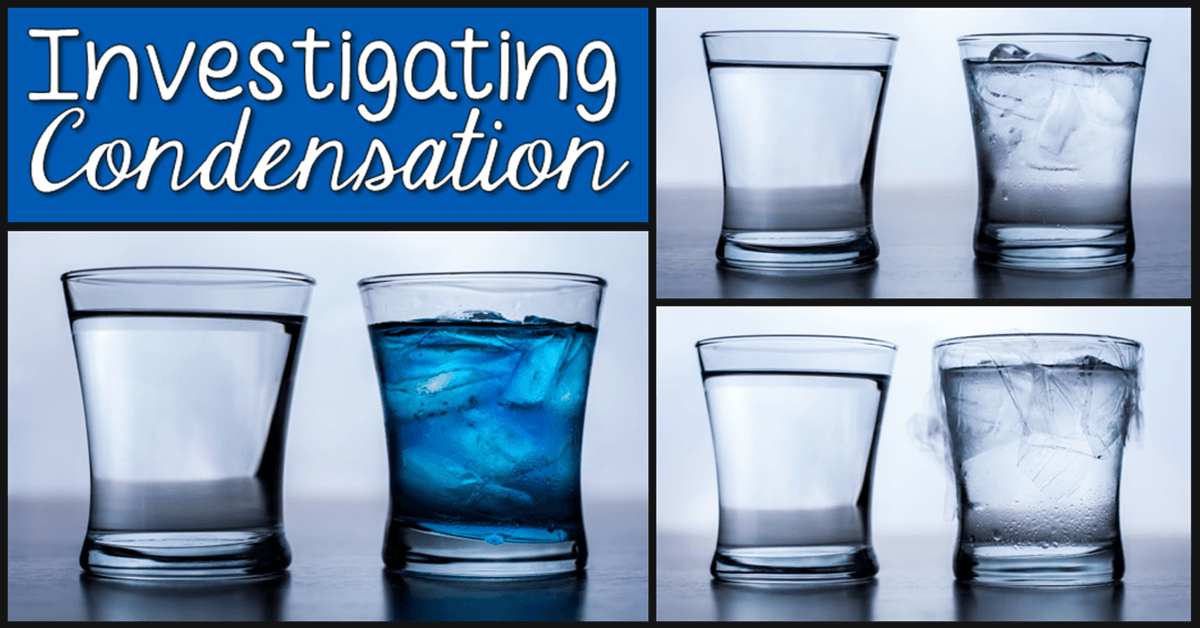 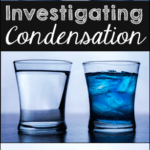 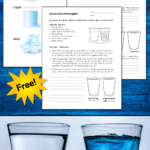 Most kids are familiar with the terms precipitation, condensation, and evaporation, but very few of them really understand what those words mean. Just ask your students to name three examples of condensation in everyday life and watch their eyes glaze over. Huh??

Here’s a simple investigation that will help your students understand what condensation is, where it comes from, and where it happens in everyday life. The activity works well as an introduction to the water cycle or as a part of a lesson on states of matter. Because this is an exploratory activity, it’s best not to provide too much background information before you begin.

Condensation Investigation is designed for students working in teams, but it’s a teacher-directed exploration rather than an independent group activity. Each team member will need a copy of both student activity pages shown in the freebie below, and everyone will record their own answers. To make sure your students get the most out of the investigation, guide them through each part of the activity, stopping after each section to discuss their findings. This freebie is exclusively for my email subscribers, but if you’d like a copy and you are not a subscriber, you can subscribe and get the freebie all in one step! Click here to request your free  copy now. 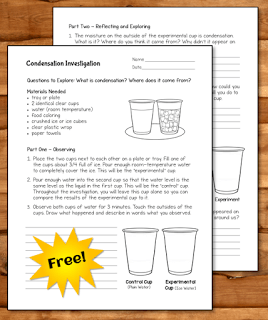 Before using the activity with your students, gather the materials described on the Condensation Investigation handout, and try the activity yourself. Be forewarned that if your classroom is cool and dry, you might have trouble getting condensation to appear on either of the cups. You might have to take the class outside for this activity or “cheat” by warming the cups before the activity. As you read through the directions below, you’ll understand the purpose of the food coloring and plastic wrap.

Seat students in teams of 3 or 4 and give each student a copy of the Condensation Investigation printables. Next, give each team a tray with all the activity materials. Designate one person to fill one cup 3/4 full of ice and pour enough water over it to cover the ice. Ask another team member to fill the second cup with water to the same level. Ask them to observe the cups carefully for 3 minutes and then to record their observations on their own papers. Remind them to draw what they see and to describe what’s happening in words.

If all goes well, your students will notice that moisture forms on the outside of the cup with ice. Explain that this moisture is called “condensation,” and ask them where they think it came from. Have them record their ideas on the lines for item #1 in Part Two.

When I conducted this activity with my 5th graders, they came up with two different ways to test the hypothesis that the condensation was coming from inside the cup. With both methods, they emptied the cups and dried them completely before starting over.

The Color Test – The second method was to put a drop of blue food coloring into the cup with the ice and then check the water that appeared on the outside to see if it was blue, too. After a few minutes, they used a white paper towel to wipe away the condensation. As I’m sure you have guessed, the water on the outside did not turn blue.

Discussing States of Matter and Condensation

After discussing the results of their investigations and establishing that the water probably did not come from inside the cup, ask your students again where they think the condensation came from and why it only appeared on the cup with ice. Some students may correctly guess that condensation comes from water in the air around the cup. However, in my experience, very few students actually understand why water vapor condenses on cool surfaces. 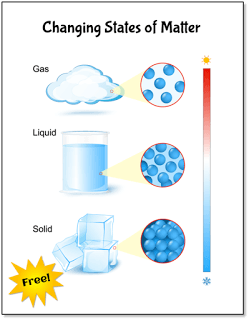 If no one volunteers the correct answer, start by explaining that there’s water in air all around us, but the droplets are so tiny that we can’t see them. If you live in a humid climate, ask your students to think about how the air feels after a summer rain shower. At those times, you can feel the moisture in the air, which is called humidity.

Most upper elementary students already know about the three states of matter. However, they might not know that matter changes its state when it’s heated or cooled as shown in the diagram on the right. I added this diagram to the Condensation Investigation freebie because I thought it might be helpful to display this visual for your students as you describe how matter changes its state.

Explain that when liquid water is cooled below the freezing point, the molecules slow down and pack together forming a solid, otherwise known as ice. In the same way, when water vapor (gas form of water) comes into contact with a cooler surface, the molecules move slower and cluster together, forming liquid water droplets. This process of water vapor cooling and changing to liquid water is called “condensation.” Condensation and evaporation happen all around us every day.

If your students are confused about how states of matter change, now would be the perfect time to dig into that topic. Read my post Move to Learn in Science to discover an engaging strategy for teaching kids about the molecular action involved in changing states of matter.

Condensation All Around Us

Conclude the lesson by telling your students that they’ve just observed one part of the water cycle in action. When warm air rises, it cools, and the water vapor in the air condenses and forms clouds. Next, ask them to brainstorm other examples of condensation that happen all around us in everyday life. Give them time to talk about their ideas within their teams and then share with the class.

A few examples of condensation that come to mind are drops forming on a cold glass of lemonade, a cloud of steam forming when you breathe out on a cold day, fog forming on a cool bathroom mirror, and dew drops collecting on a spider web early in the morning. Point out that all of these examples involve warm, moist air coming into contact with a cooler surface. 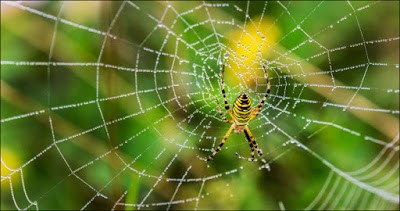 This investigation is a great way to introduce the water cycle, but condensation is only one part of the system. Check out my post Hands-on Water Cycle Fun for some ways to explore evaporation, precipitation, and transportation, including how to create a simple water cycle model using a rotisserie chicken container and how to demonstrate cloud formation in a jar.

No matter how much time is spent on hands-on activities, children frequently confuse the terms condensation, evaporation, and precipitation. I’ve found that the best way to help kids make sense of these confusing terms is with a concept-sorting activity. For this activity, you’ll need sorting cards with examples of evaporation, condensation, and precipitation. You’ll also need header cards that have one of those three categories written on each card. Seat students in teams of 3 or 4 and have them stack the example cards face down. Team members take turns flipping over one water cycle example card at a time and placing it in the correct category. However, before a student places any card in a pile, he or she has to justify to the team why it belongs there. This step is critical for challenging kids to think more deeply about the concepts. 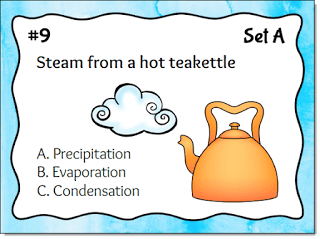 You can create your own sorting cards for this activity or use my Parts of the Water Cycle task cards. Each card includes a short descriptive phrase, an image, and multiple choice answers. There are two different levels with 16 cards in each set which makes it easy to differentiate instruction. Set A is the easier set, and those task cards only include evaporation, condensation, and precipitation. Set B includes the additional concepts of run-off, accumulation, and transpiration. Answer keys are included, off course!

Having multiple choice answers gives you the option of using the task cards for more than concept sorting. You can also use them for class games like Scoot, cooperative learning review games, or formative assessment. In addition to the physical task cards, this product includes task card images that you can display using PowerPoint or upload to online review programs like Plickers and Kahoot. You can purchase Parts of the Water Cycle Task Cards alone or as a part of my Water Cycle Bundle.

By the way, kids aren’t the only ones who find water cycle concepts to be confusing. I’m often asked about task card #9 in Set A pictured above. How would you classify the cloud of steam rising from a boiling teakettle? It’s not precipitation because precipitation is water falling through the air. It’s not evaporation, because evaporation is invisible. The cloud of steam is actually an example of condensation because when the hot water vapor comes in contact with cooler air, it condenses into water droplets. This is a tricky one, I know. But discussing examples like this with your students will foster critical thinking and will help them grasp the scientific principles behind the water cycle.

If you haven’t grabbed a copy of the Condensation Investigations freebie, you can download it from Laura’s Best Freebies, a private page for my email subscribers that has over 75 free resources. If you’re not sure where to find that page, or you aren’t yet a subscriber, click HERE to have it emailed directly to you. 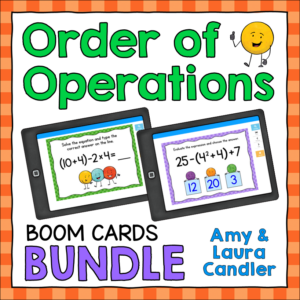